After visiting Muir’s tea room, the bay area vegan girls and I decided that the next tea party would be at my house (aka the Vegan Dollhouse). Ashley came early to help me set up, and she made these cute tea sandwiches that represent veganism and love all while hugging field roast and chao cheese. They were inspired by the tea sandwiches we had at Muir’s tea room.

Ashley also brought some cute cucumber bunnies (not because she mistakenly bought cucumbers at the store when she meant to buy zucchini; just because she thought it would be a nice addition to the tea party). 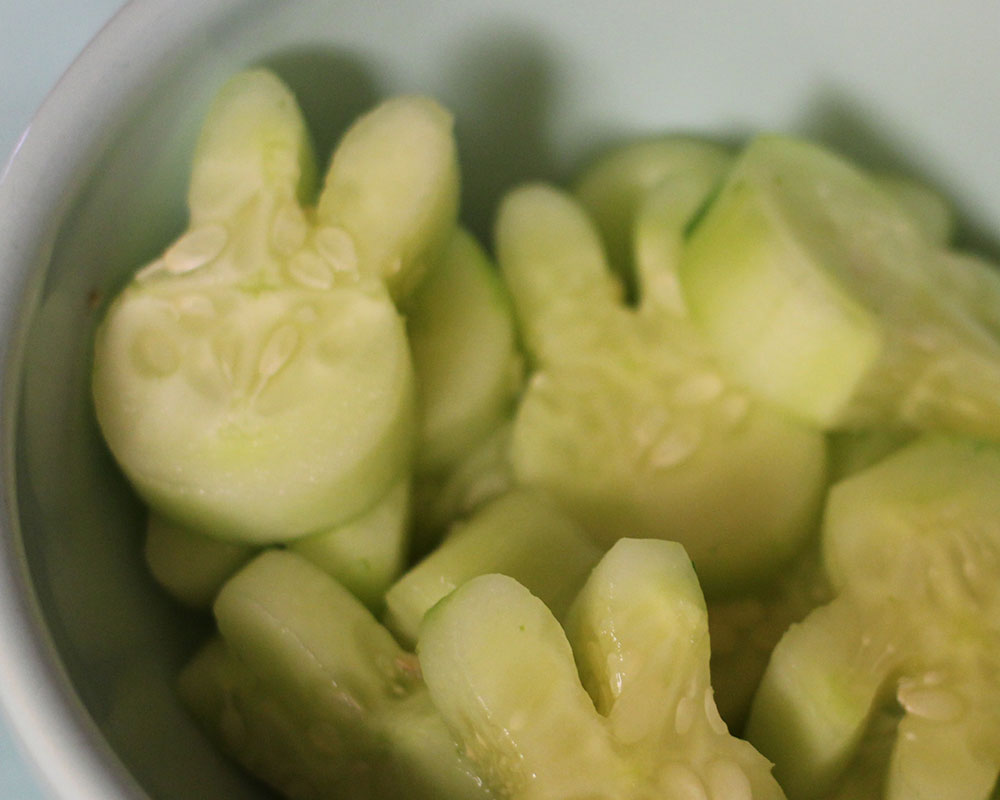 Next to arrive was Eve, and she brought these adorable ice cream sandwiches made with animal crackers. I don’t know how she managed to keep them from melting on her drive from SF, but if you ever need advice on how to transport a dead body or vital organ, I’m pretty sure she could give you some good advice. 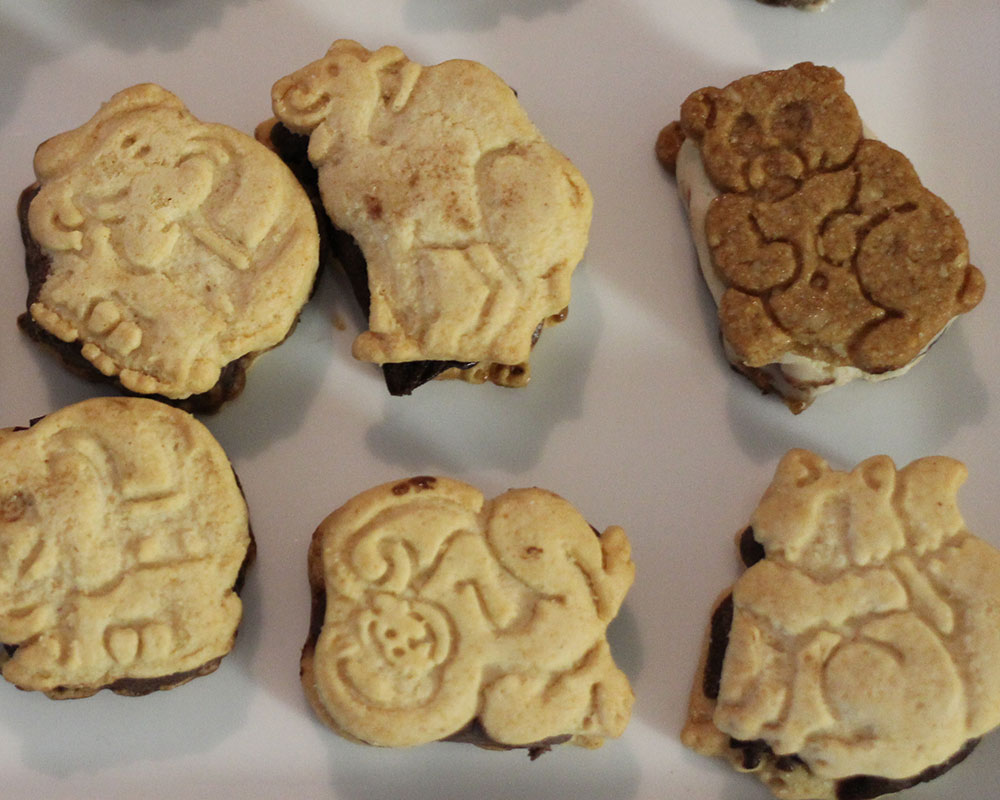 Brandi and Rosie came together, and even though Brandi was extremely busy meeting and greeting (and taking selfies with) our canine visitor Frankie, I managed to pry them away from eachother long enough to get this picture of them.

Since Brandi’s persuasion skills are unmatched, Rosie made 2 cute items on their behalf: one sweet & one savory. I would never have guessed that these were the first chocolates she’s ever made. They were not only raw, but they tasted delicious, AND she made 3 kinds! 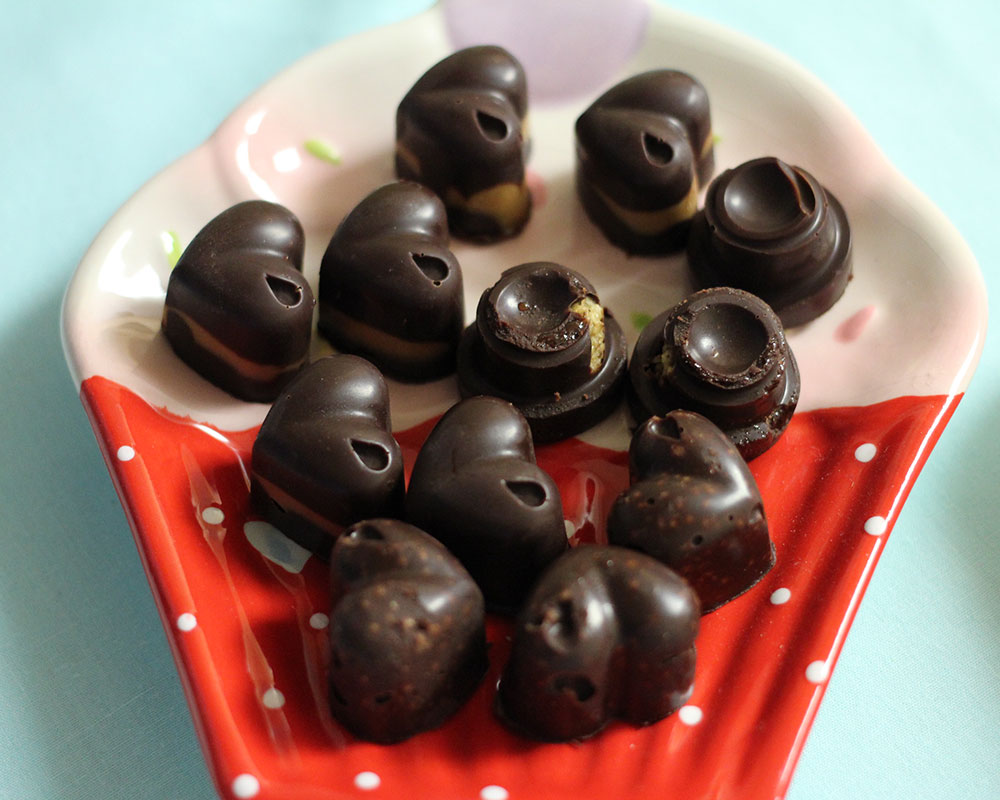 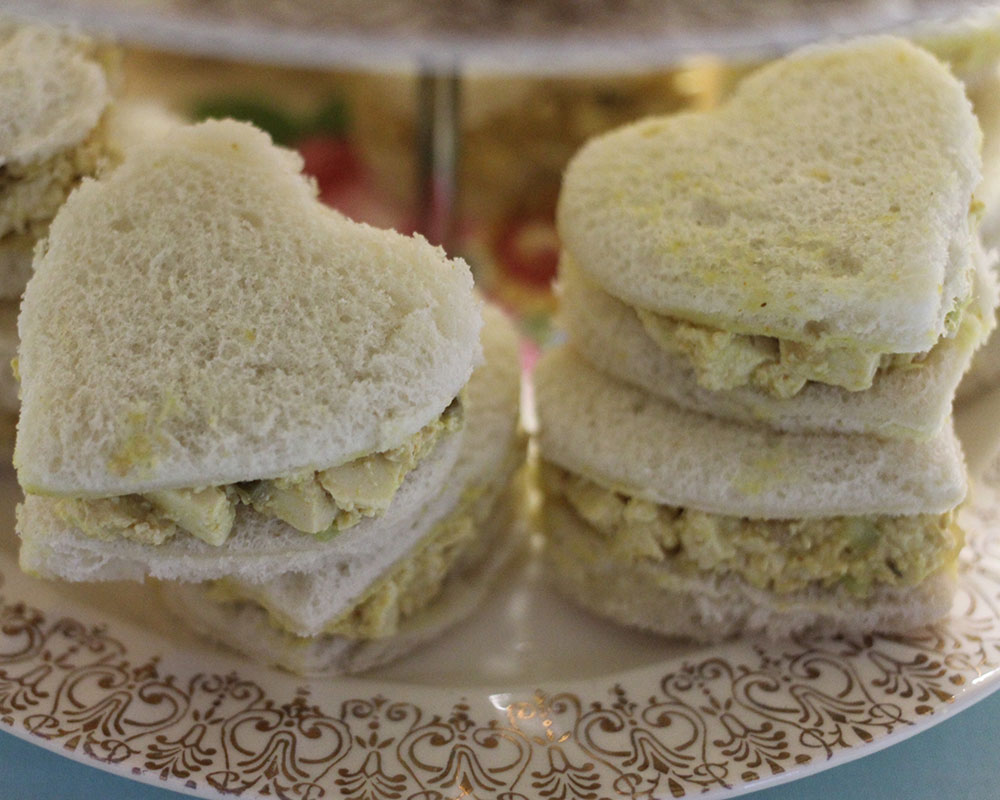 The last to arrive (even though she lives the closest…haha) was Tina, and because her kitchen was a billion degrees today, the marshmallows in her rice krispie treats decided to stay melted forever, and therefore photography of her item was prohibited. Lucky for us, she decided to model both of the things I made….the fried mac-n-cheese hearts….

…and the star-shaped ice cream sandwiches. 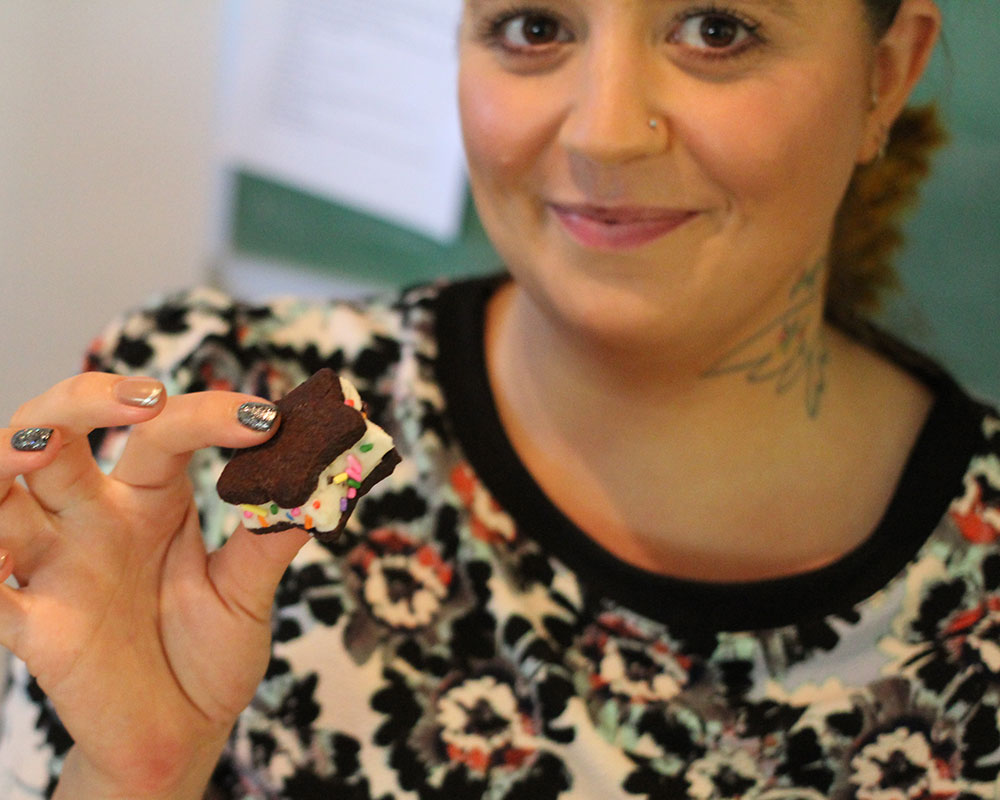 We had a nice variety of teas that included Chai, Cookie, White Rose, Lavender Lemon Mint, Oolong Peach, and Chocolate Strawberry, which were accompanied by Calafia Farms Almond Milk Creamer. 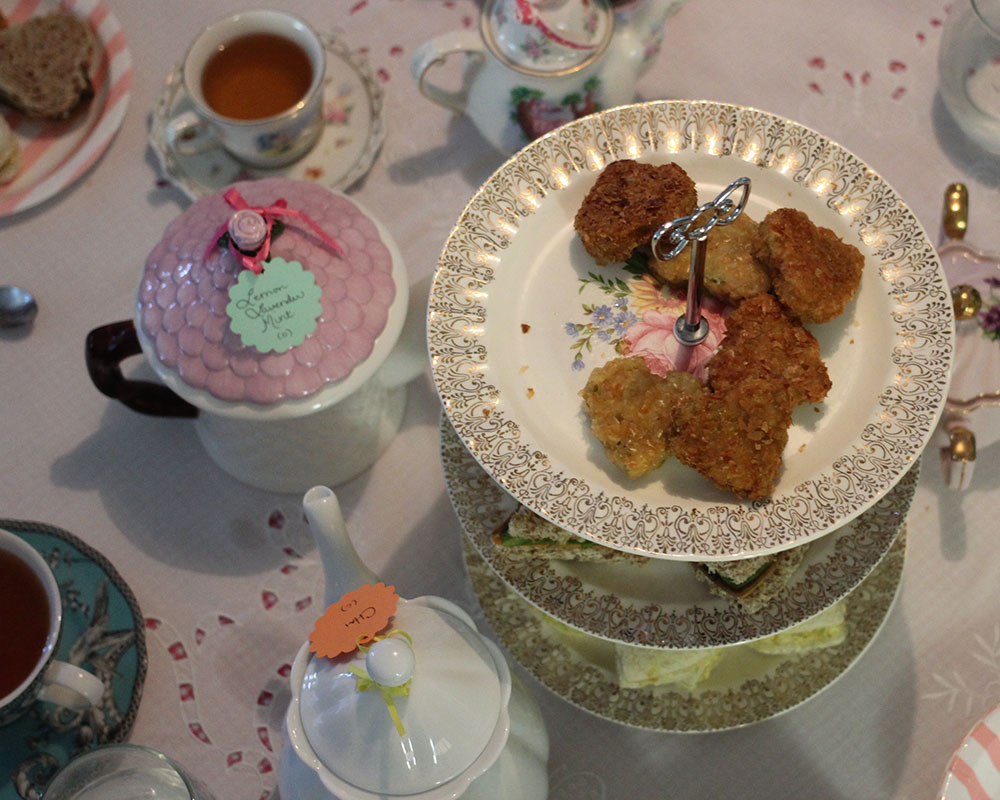 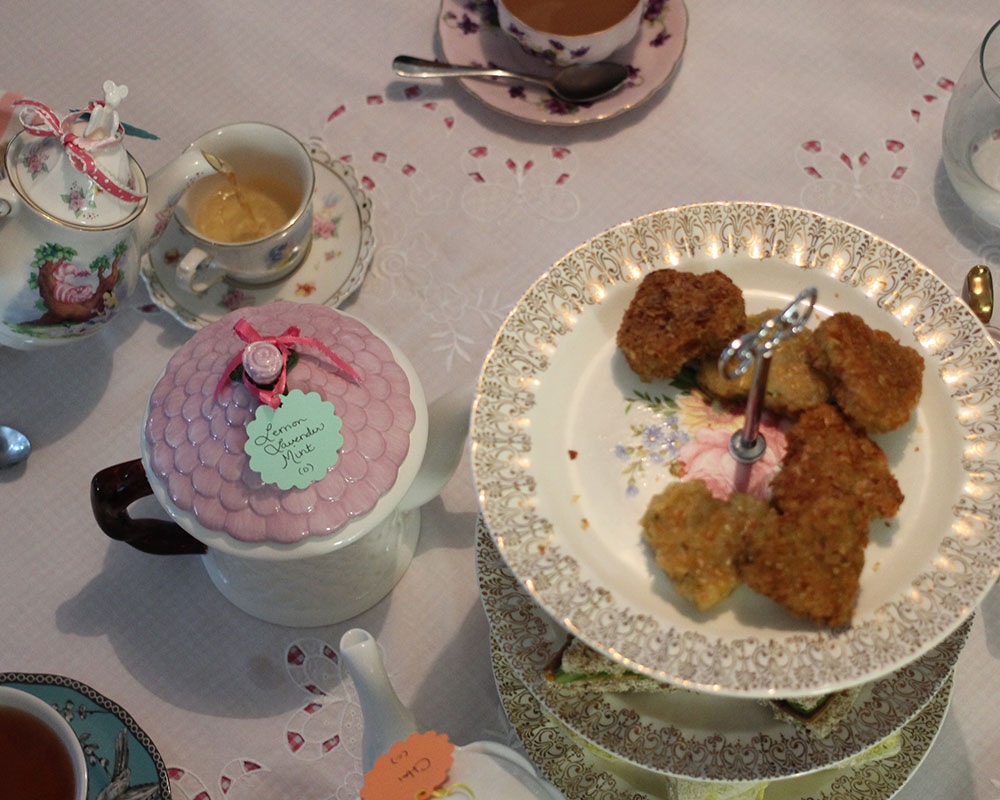 And here’s a picture of all the gorgeous vegan ladies that I’m lucky to call friends. 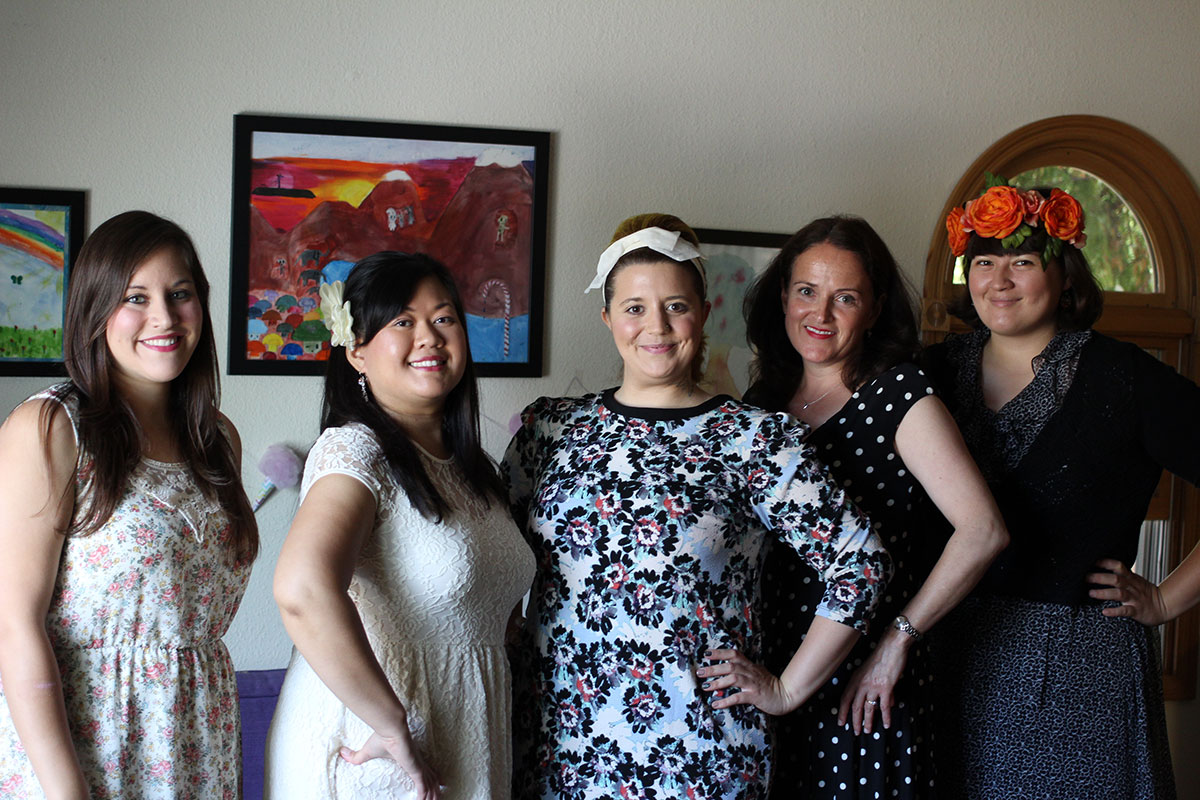