♫ Listening to: I Want You Back by The School ♫

I promise that no dog food was used in this 2-layer 8” or 9” round chocolate puppy chow birthday cake. I recommend spending 2 days to make this cake, rather than trying to do it all in the same day. You’ll thank me later. (On day 1: I baked the cakes and made the puppy chow. On day 2, I made the filling, the frosting, and decorated it). You can also assemble the cake with a crumb coat and freeze it for up to a week. Then you can decorate it the day you need it. That saves a ton of time on party days when you’re already busy.

Heat the vegan chocolate chips and peanut butter in a saucepan over low heat until completely smooth and melted.

Pour the 12 ounces of cereal into the largest bowl you have.

Pour the melted peanut butter chocolate over the cereal and mix until all the cereal is completely coated.

Fill a clean produce or ziplock bag with a cup of powdered sugar.

Transfer half the coated cereal to the bag.

Close the bag, and shake it really well until all the cereal is coated.

Spread the puppy chow on a parchment paper lined baking sheet, cutting board, or whatever else you have so that it can dry before you put it away in air tight containers.

Add another cup of powdered sugar to the bag and repeat with the rest of the coated cereal. 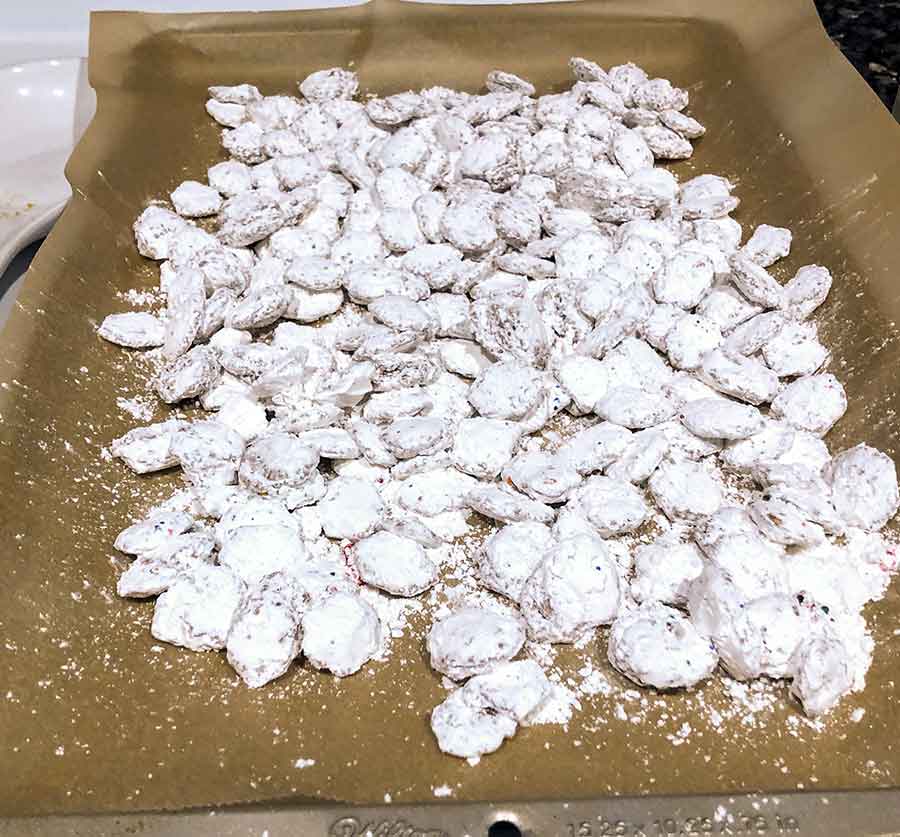 Coat two 8" round cake pans with any vegetable oil (or vegan nonstick spray).

Sift together the flour, cocoa powder , baking soda, and baking powder into another bowl.

Add the oil, sugar, and vanilla to the soymilk mixture, and stir well.

Pour half of the batter into each cake pan.

Bake for 35 minutes, until when you insert a toothpick into the center of one, it comes out clean. Don’t open the oven door until you’re ready to test the cake for doneness; opening the oven door too soon could cause your cake to sink.

Set 8" round cake pans on cooling rack to cool in the pans for at least 10-15 minutes before flipping them over onto the cooling racks. I always use the same method for removing my cakes from their pans: shimmy a silicone spatula down the sides of the pan so they curl under the cake. Do this all the way around the perimeter of the cake.

Whisk the vegan butter, palm shortening, and peanut butter using a stand mixer or a handheld electric mixer fitted with the whisk attachment.

Sift in powdered sugar, a cup at a time, adding plant-based milk when it gets too thick.

Transfer to a piping bag fitted with a large tip (or no tip) and set aside until the cakes have cooled completely.

Pipe the peanut butter filling on top of one of the 2 cake layers. If the cakes aren’t flat on top, use a bread knife to slice the hump off the tops of both cakes first, and put the cut side towards the bottom. 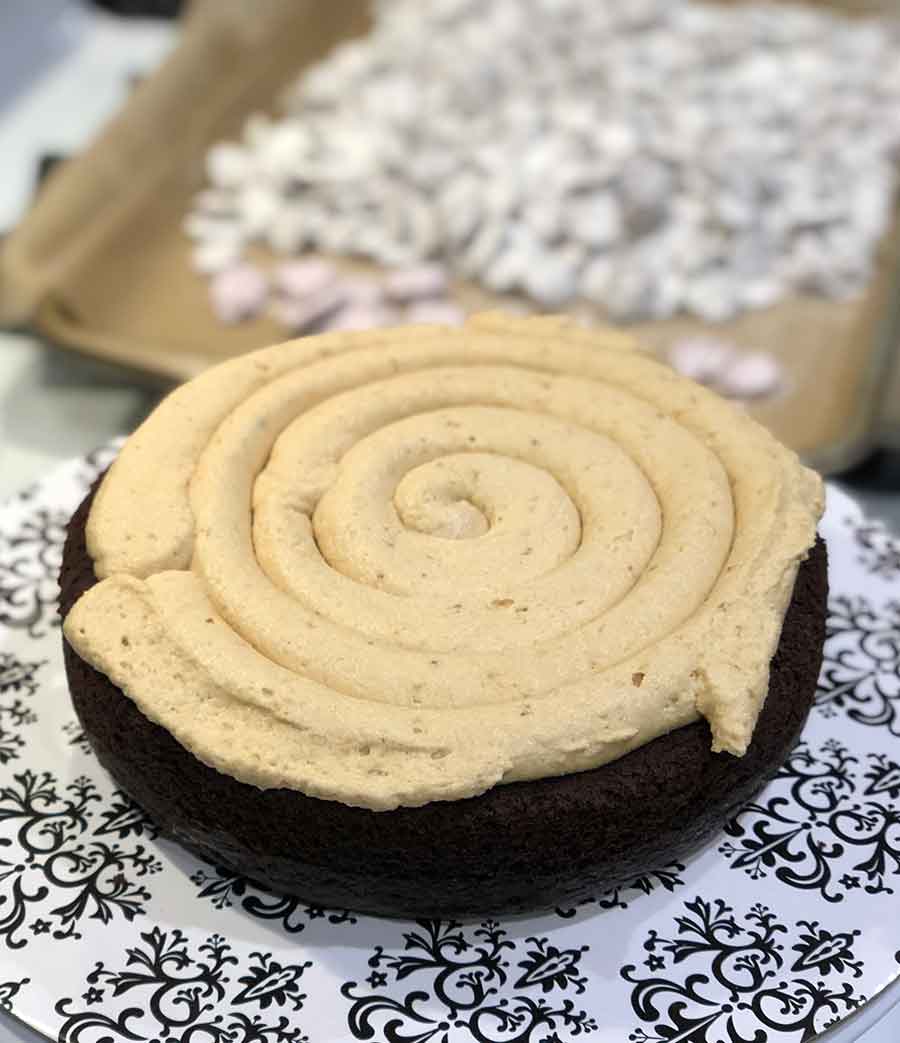 Press puppy chow into the peanut butter filling before topping with the second layer of cake. 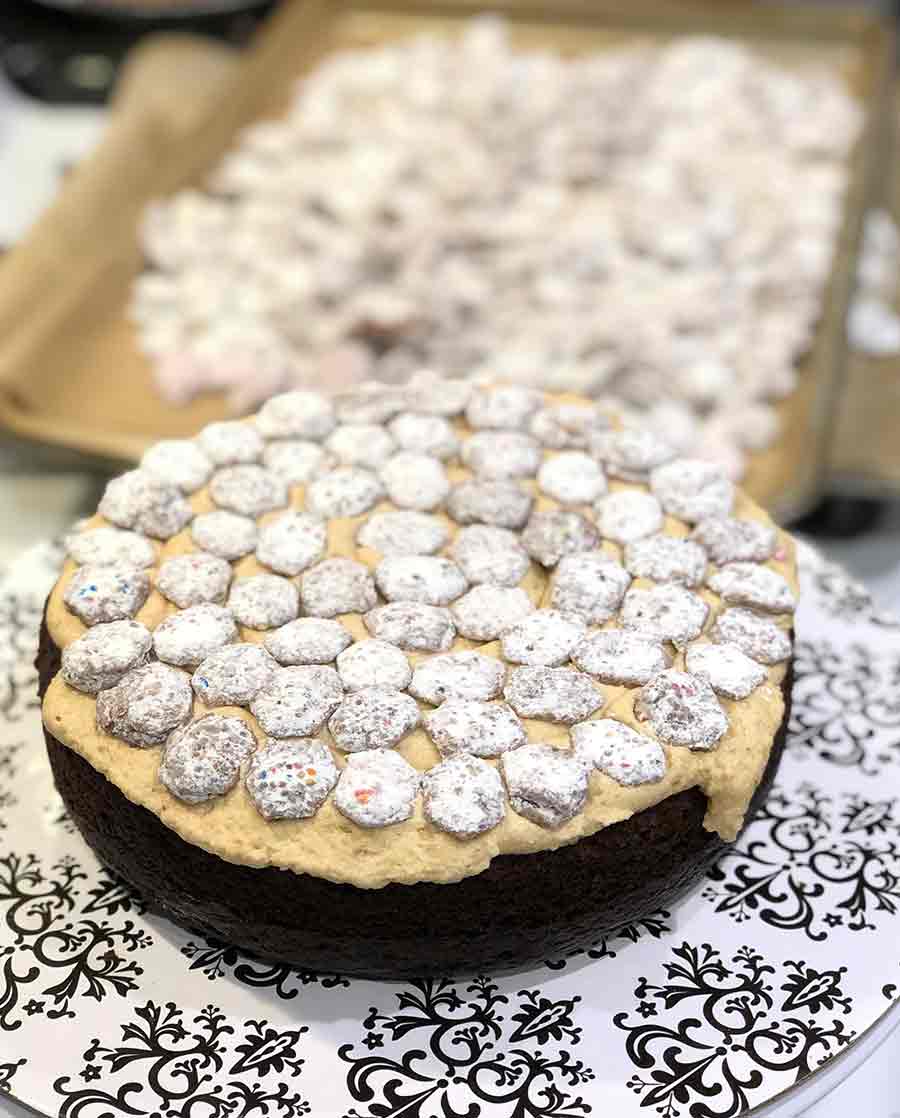 Chill the cake for at least the time it takes you to prepare the frosting. 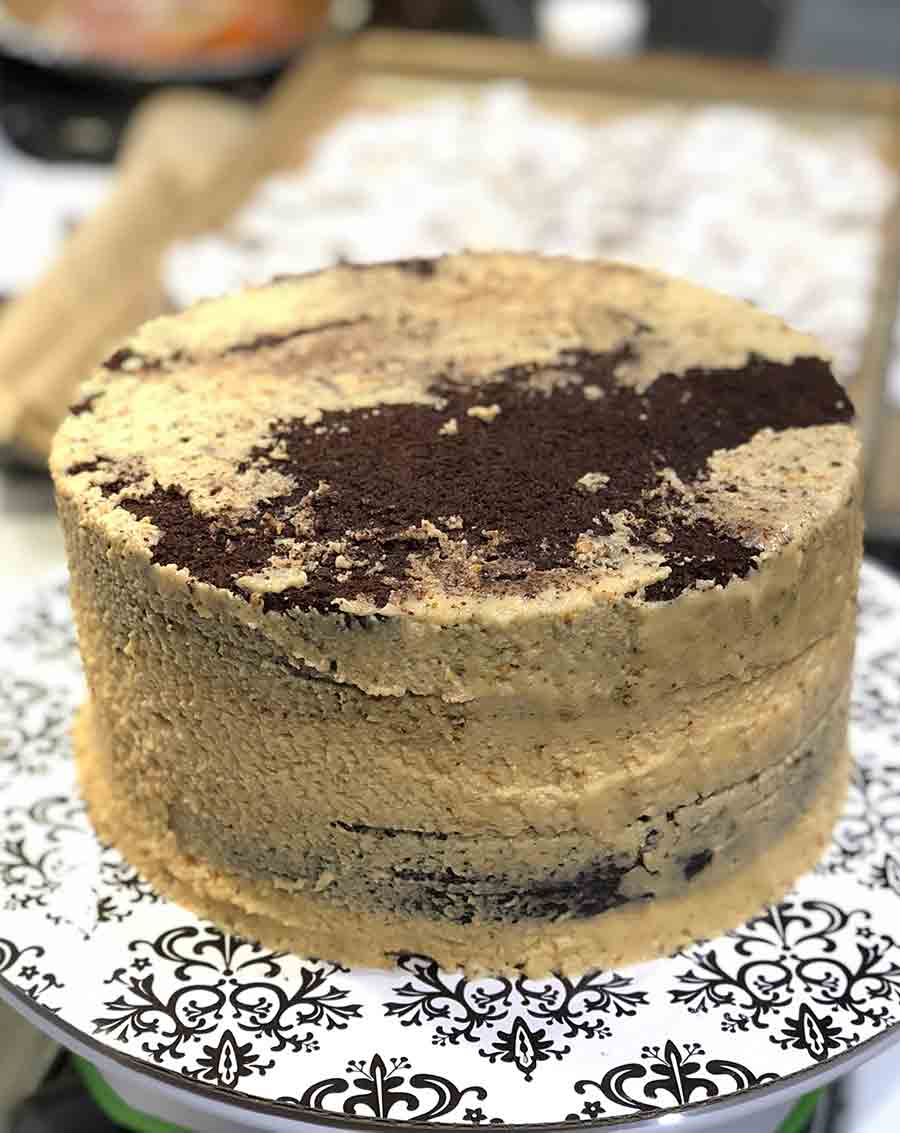 Leave the earth balance at room temperature for 10-15 minutes before starting, if you have time. This isn’t mandatory, but it helps the consistency.

Whisk the shortening, earth balance, and vanilla for 1 minute using a stand mixer or a handheld electric mixer. Use a silicone spatula to scrape the sides, and mix again until light and fluffy.

Sift in the powdered sugar, 1 cup at a time, mixing for at least minute between each addition. Start the mixer on the lowest setting so the powdered sugar doesn’t fly everywhere and then gradually increase the speed to high. After mixing in the third and fifth cups, scrape the sides with a silicone spatula, and mix again.

Divide the frosting into 4 separate bowls.

Frost the entire outside of the cake.

Spin the cake, using an offset spatula to smooth out the frosting.

Heat the coconut milk on the stove until it starts to simmer.

Add the vegan white chocolate and then remove from heat, cover the pot, and swirl it around.

Wait for 5 minutes before uncovering and whisking the ganache until smooth and melted.

Cool the ganache for around 15 minutes before decorating cake.

Spoon ganache around the perimeter of the cake at one-inch intervals to get the perfect size drips to start falling down the sides of your cake. Check out the tutorial on my grasshopper cake to see how I do my ganache.

Fill the top of the cake once you have all the drips on the sides. Use an offset spatula to smooth out the ganache on the top. You can also tap the entire cake on the counter to get the spatula lines to settle.

Chill the cake while you prepare the decorations. If you want sprinkles on top of your ganache, add them before you chill the cake.

Fill a piping bag with the remaining frosting.

Gather sprinkles or any other decorative treats you plan to use.

Remove the cake from the fridge.

Pipe frosting on top of the cake using a Wilton star tip 1M and around the perimeter of the cake as you choose. I did a waterfall effect with mine.

Decorate with sprinkles and puppy chow. 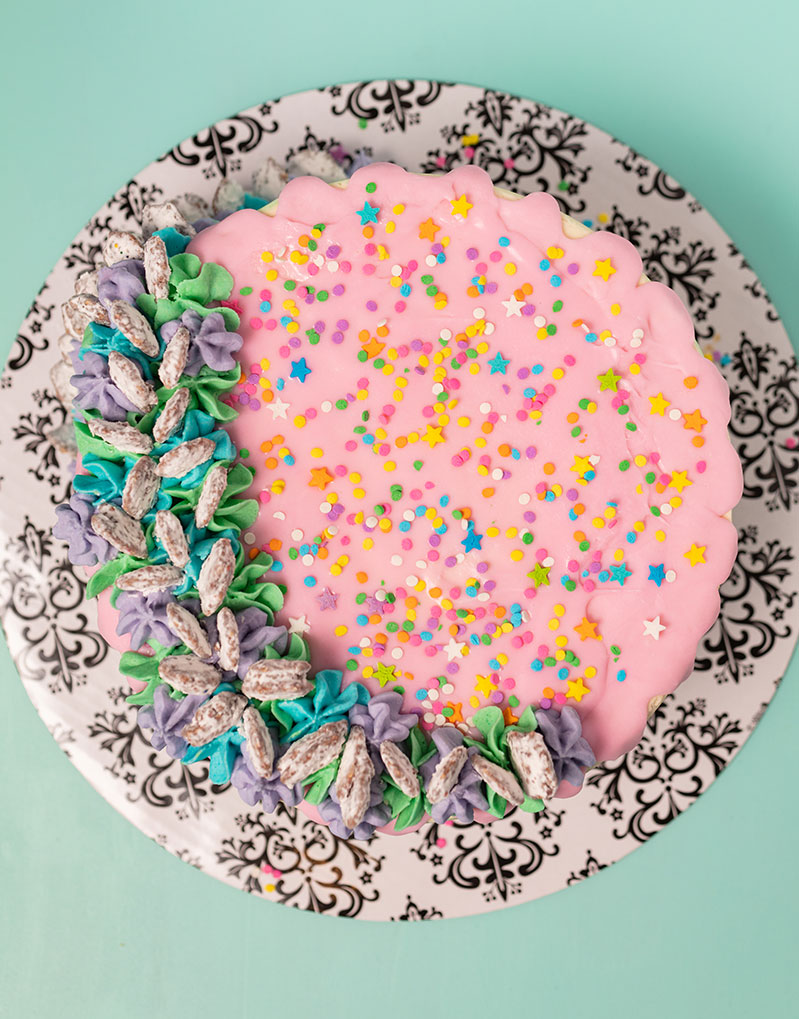 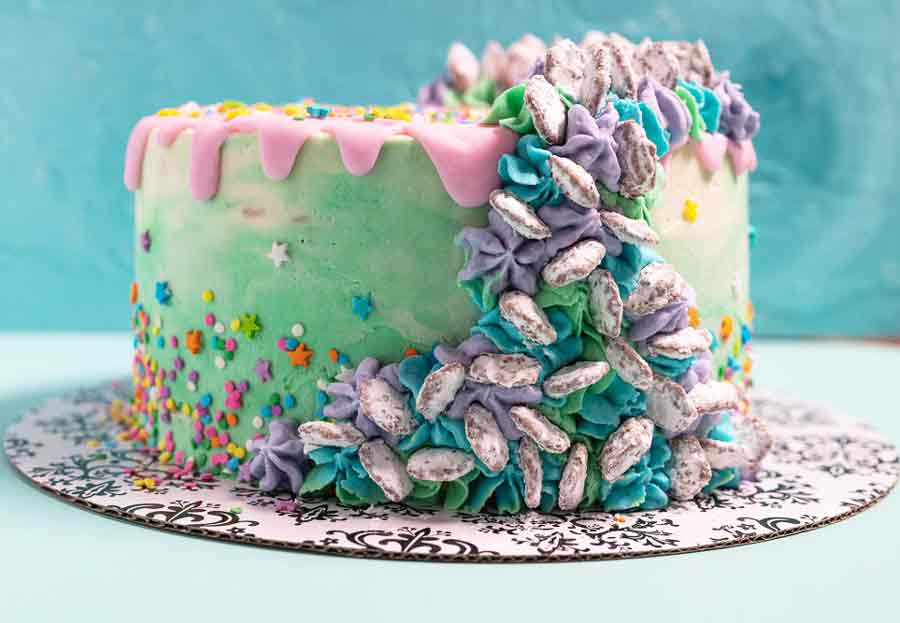 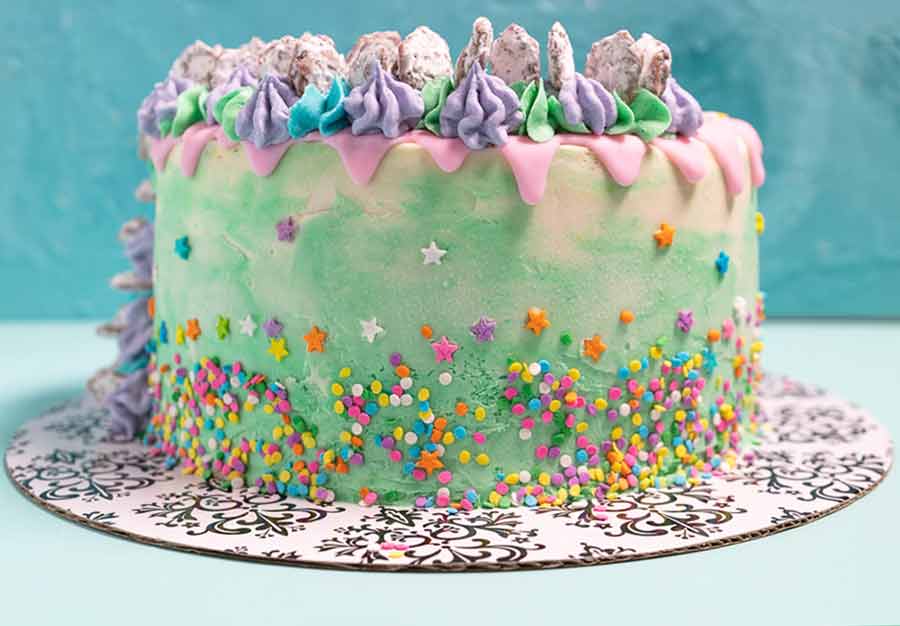 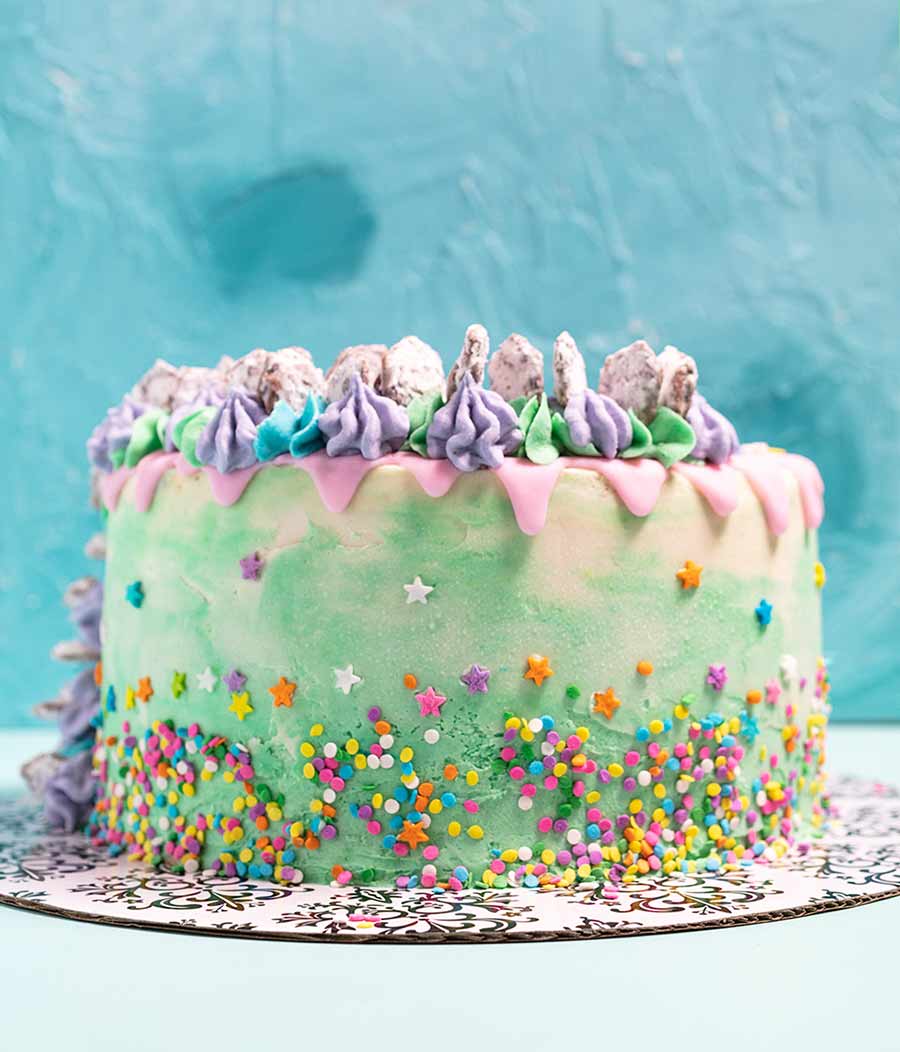 Here’s a (very long) video of me and Kimmy live streaming while decorating it. 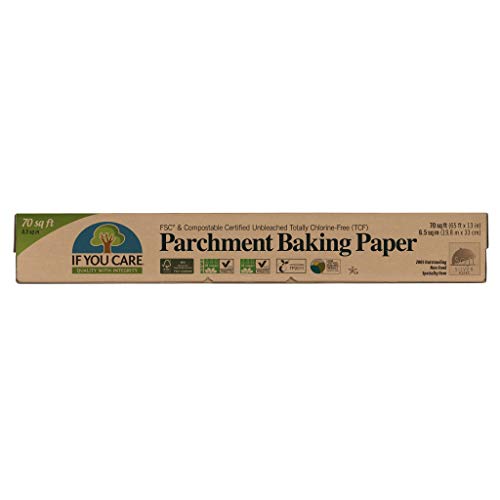 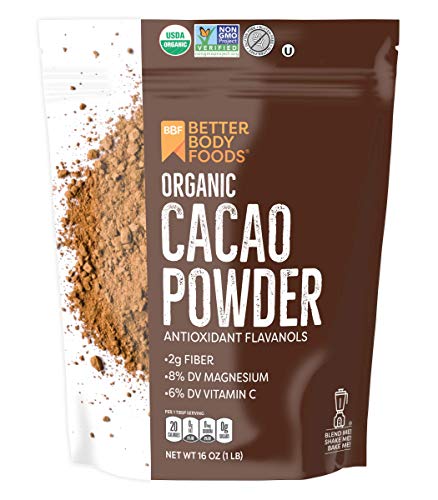 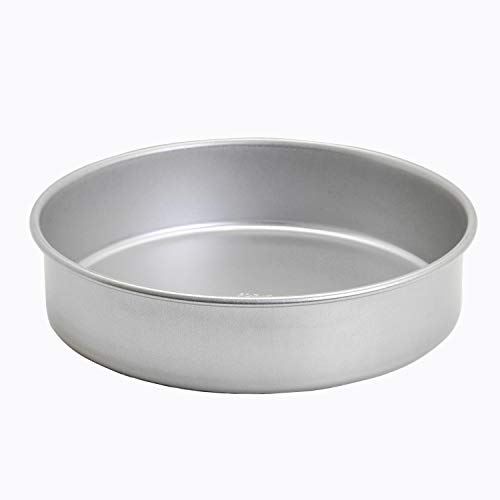 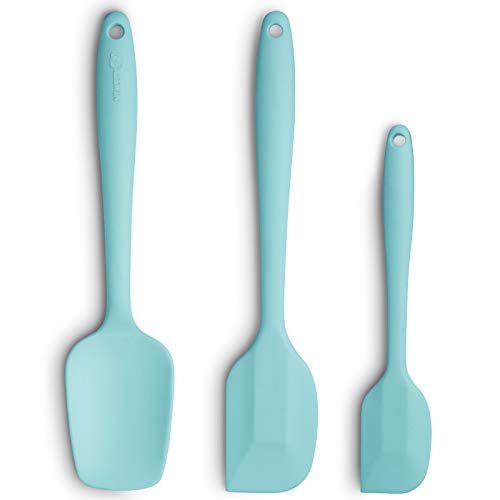 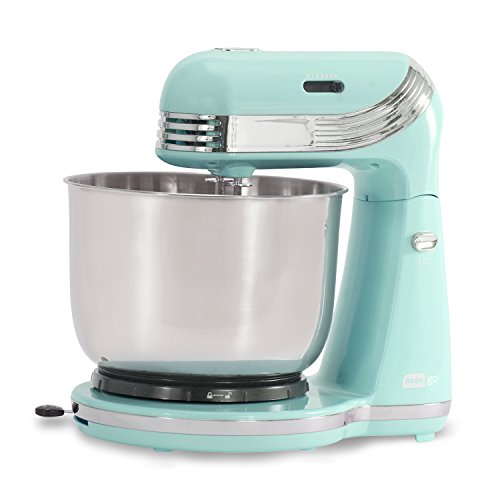 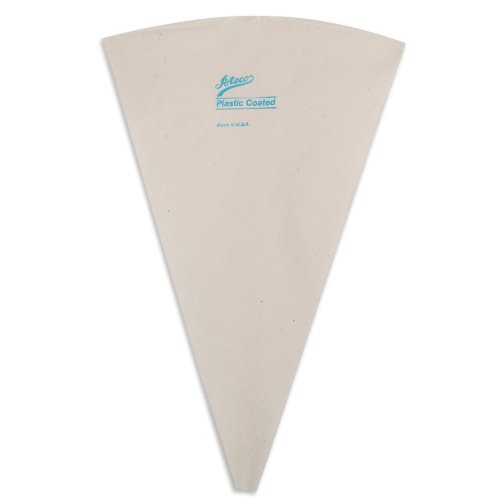 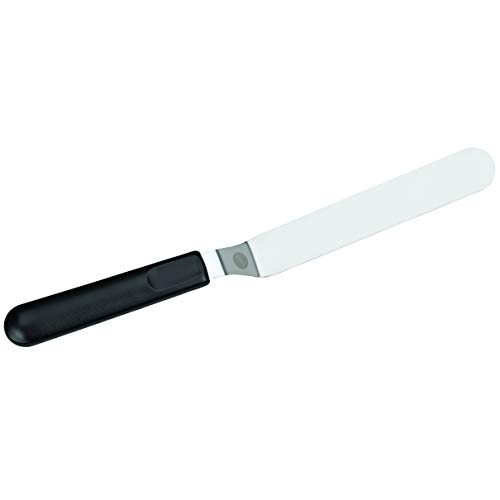 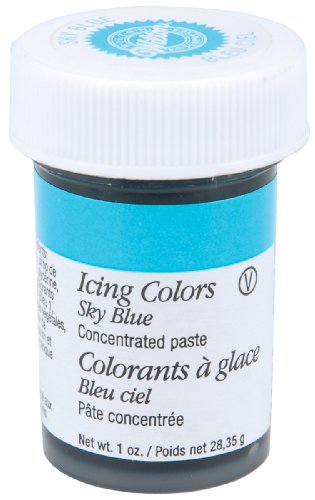 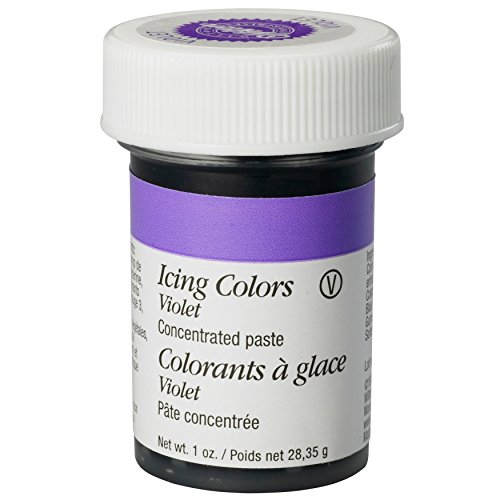 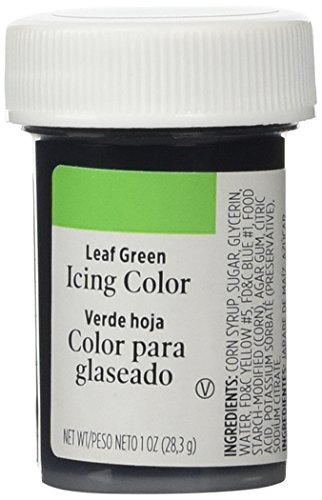 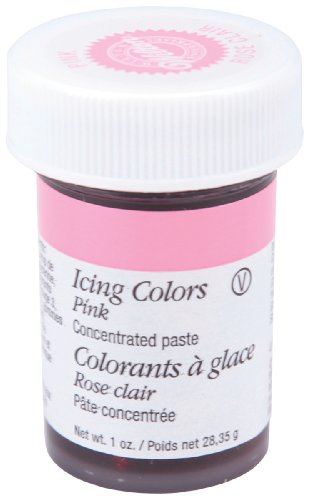 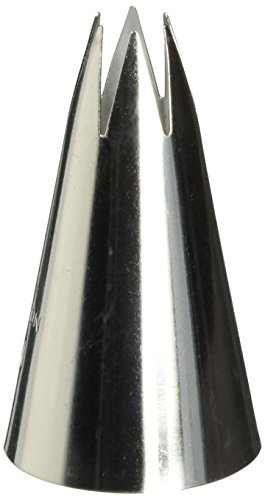 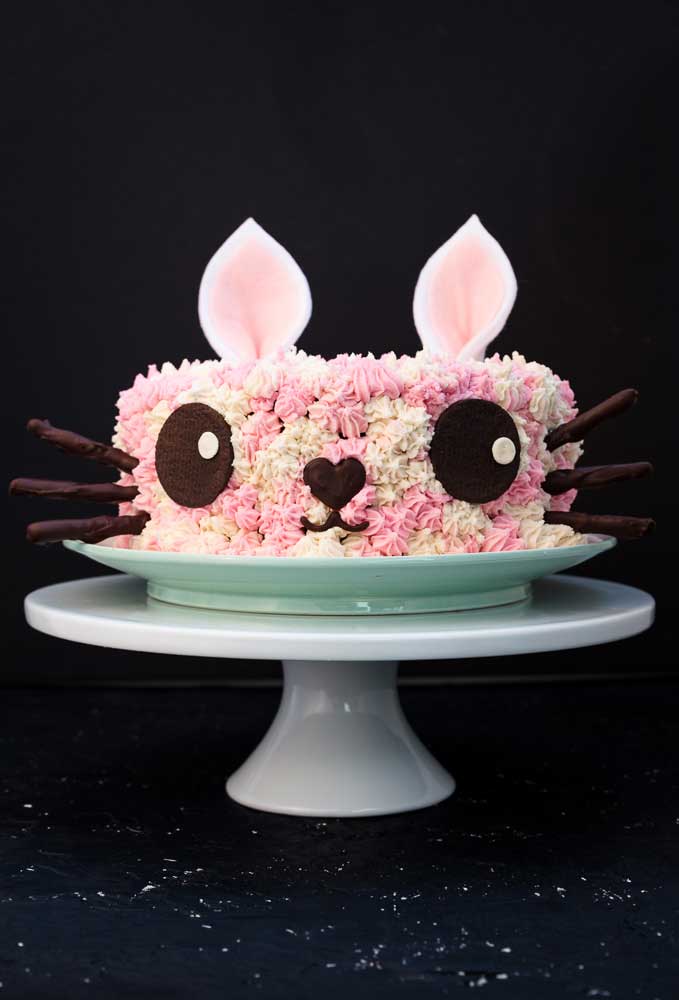 This 2-layer organic vegan funfetti cake is decorated to look like a pink and white kitty cat - just don't eat the ears! 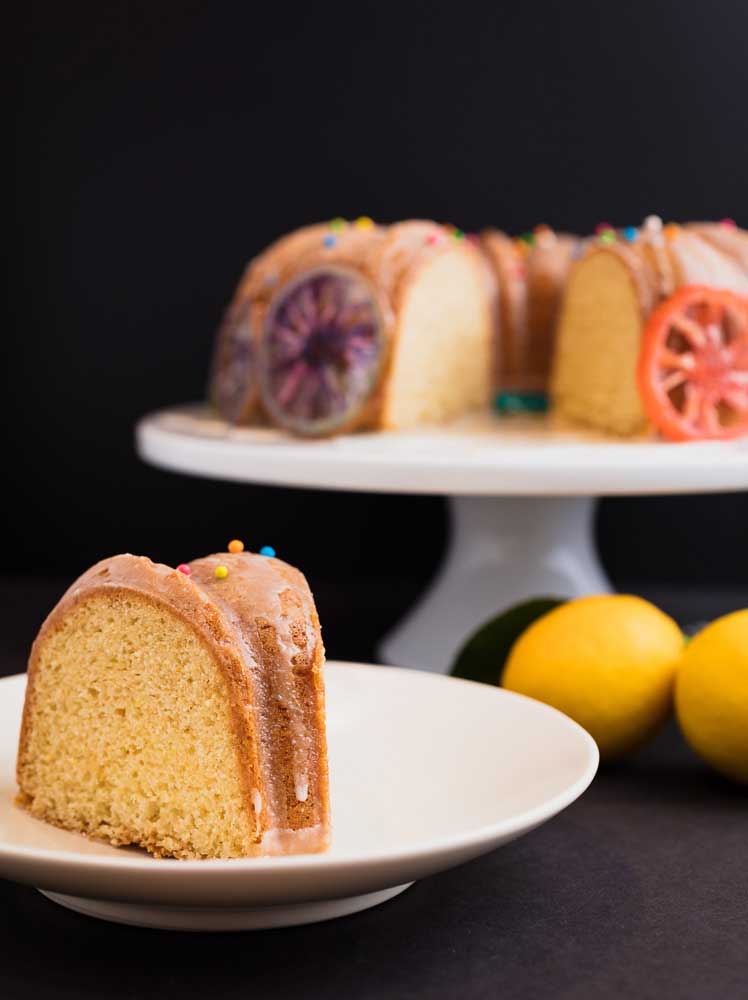 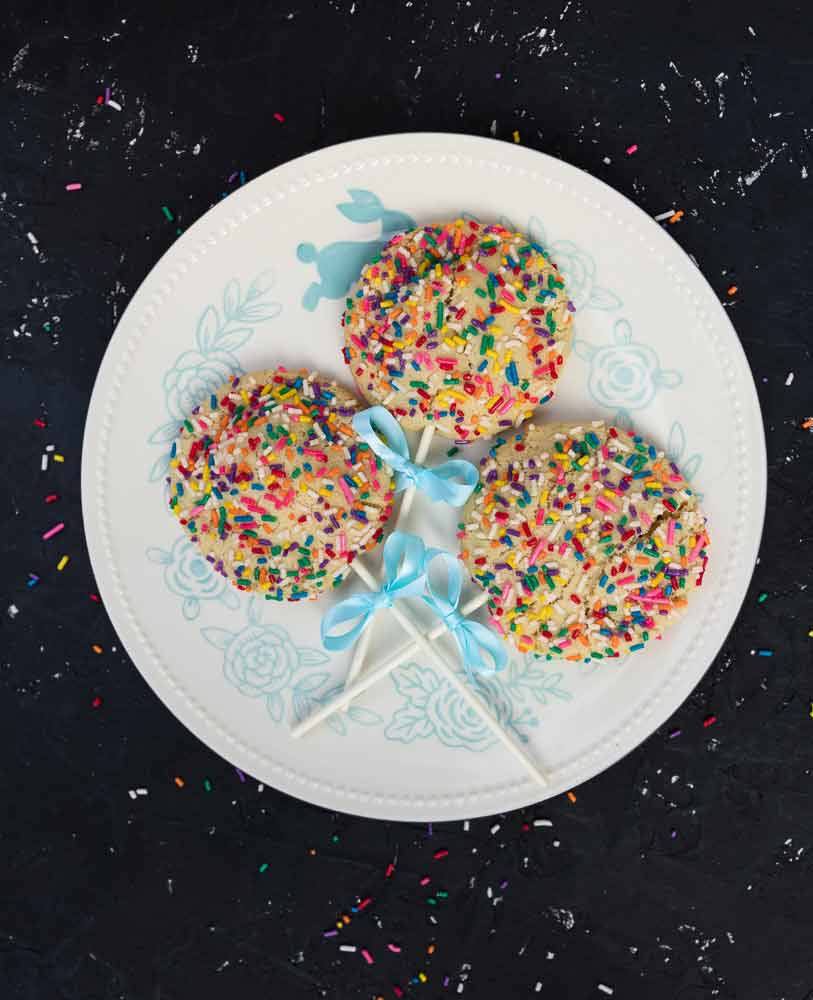 Posted in Birthday, Christmas, Cookies, and Dessert, with other Recipes