I had such a difficult time finding vegan sprinkles back when I went vegan. I did a ton of research and found a few brands who made some of their sprinkles vegan, but it wasn’t consistent. Nowadays, there are SO MANY more options for buying vegan sprinkles, but for those new to vegan baking, I thought I would make it easier for you by listing some of my favorite brands of vegan sprinkles.

First off, you might be wondering how could sprinkles not be vegan? I wonder the same thing about paint, cars, computers, etc. You’d be amazed at the animal products that psychos will sneak into things. For example, sprinkles can contain:

Lucky for us, there are lots of places to buy vegan sprinkles, including:

Here’s a list of some of the vegan sprinkles that I have used or seen vegan friends using.

DISCLAIMER: Some vegans don’t eat sugar unless they know where it came from since oftentimes, sugar can be processed through bone char. I will make a note under each brand if I’m uncertain about their sugar source. If I don’t mention it, you can assume they use sugar that is processed in a vegan-friendly manner. Also, 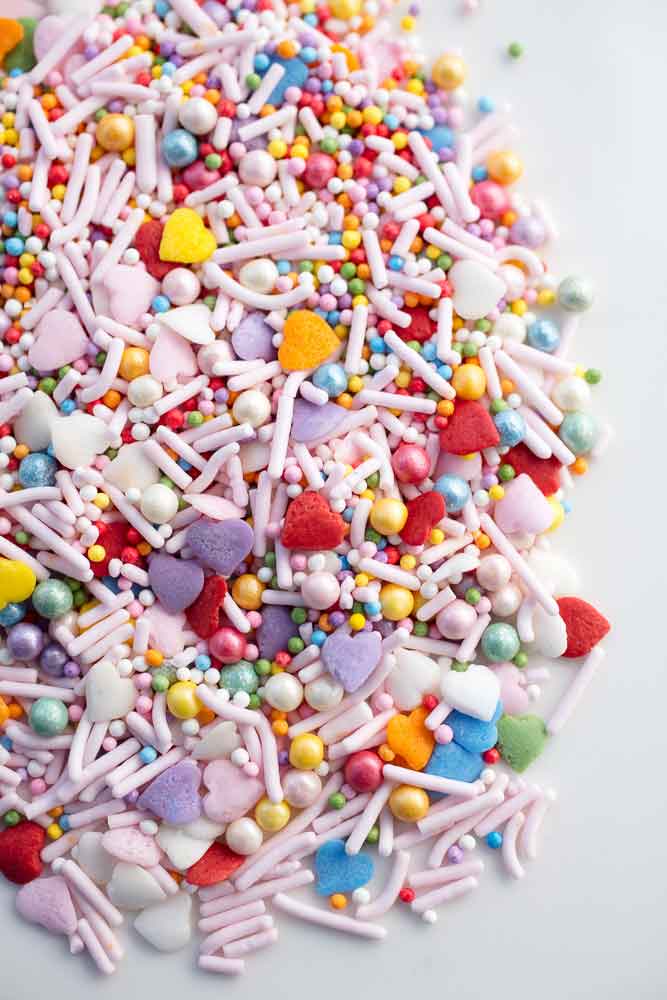 Baking Time Club is basically a vegan sprinkle lover’s dream, and here’s why! Not only are ALL of their sprinkles vegan, but the owner of the company is also vegan! I don’t know about you, but I just love supporting vegan-owned companies! Baking Time Club sells some really cute sprinkle mixes like magical stardust and cosmic unicorn for when ordinary sprinkles just aren’t enough. And the most fun part of all? They offer sprinkle subscriptions! This means you can get new surprise sprinkles each month!!!

I used these sprinkles when I made my galaxy cupcakes.

Baking Time Club gave me this coupon code to use on my next order, so maybe you can use it too. BTC12 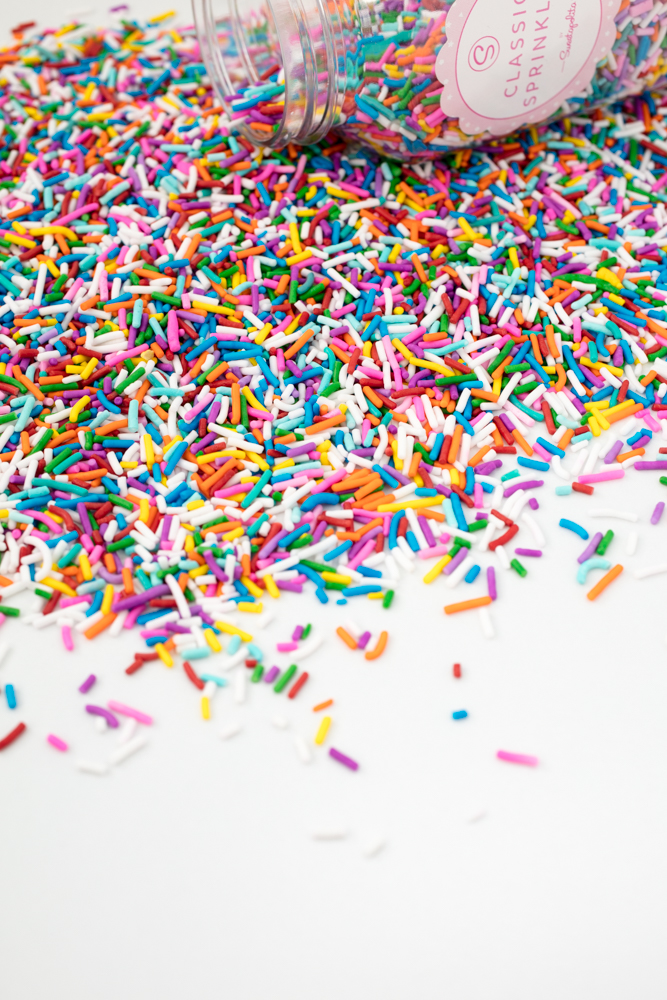 Sweetapolita has some reallllly cute sprinkles. They also have a fun instagram account, so you should follow them for inspiration. Not all of their sprinkles are vegan, but here’s a list of the ones that are. (They also have some gluten-free and vegan sprinkles if you’re into that.) If you purchase these through etsy using this link, you can get free shipping!

I used these sprinkles when I made my banana split birthday cake.

Fancy Sprinkles are similar to Sweetapolita, in that they’re cute, and they’re not all vegan. Here’s their list of vegan sprinkle options.

I used these sprinkles when I made a pink funfetti cake. 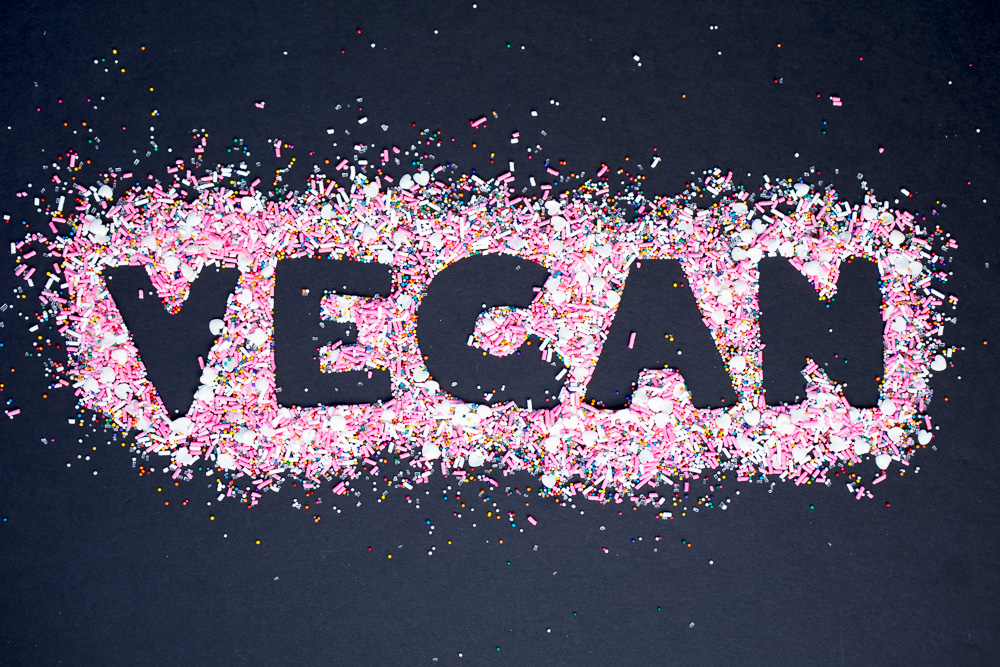 Sweets & Treats are similar to Fancy Sprinkles and Sweetapolita, in that they’re cute, but they’re not all vegan. Here’s their list of vegan sprinkle options, but my favorite ones are the circus cookie ones featured in my photo. 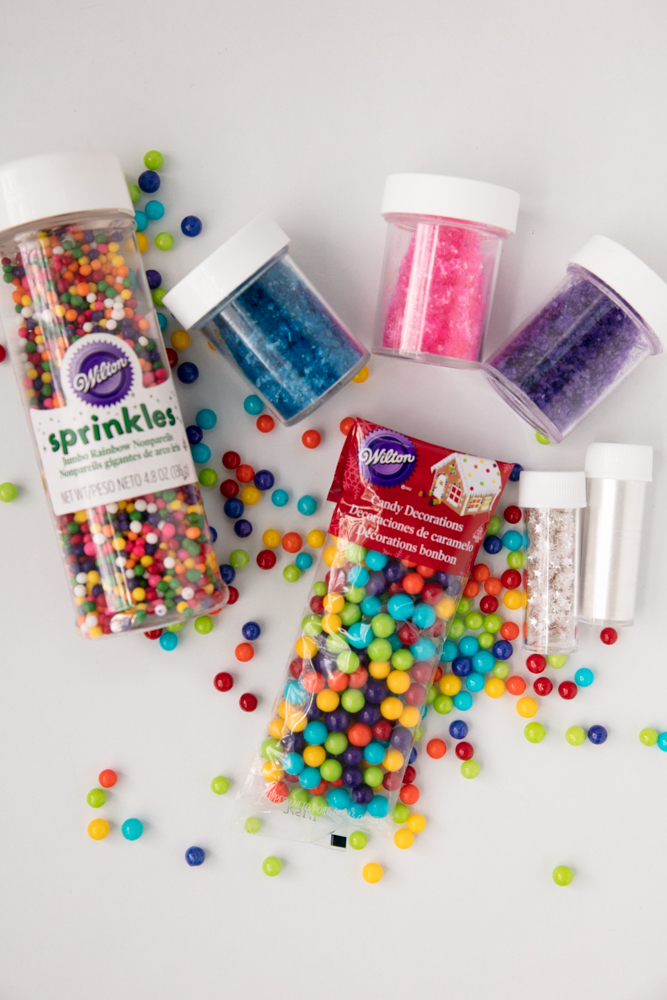 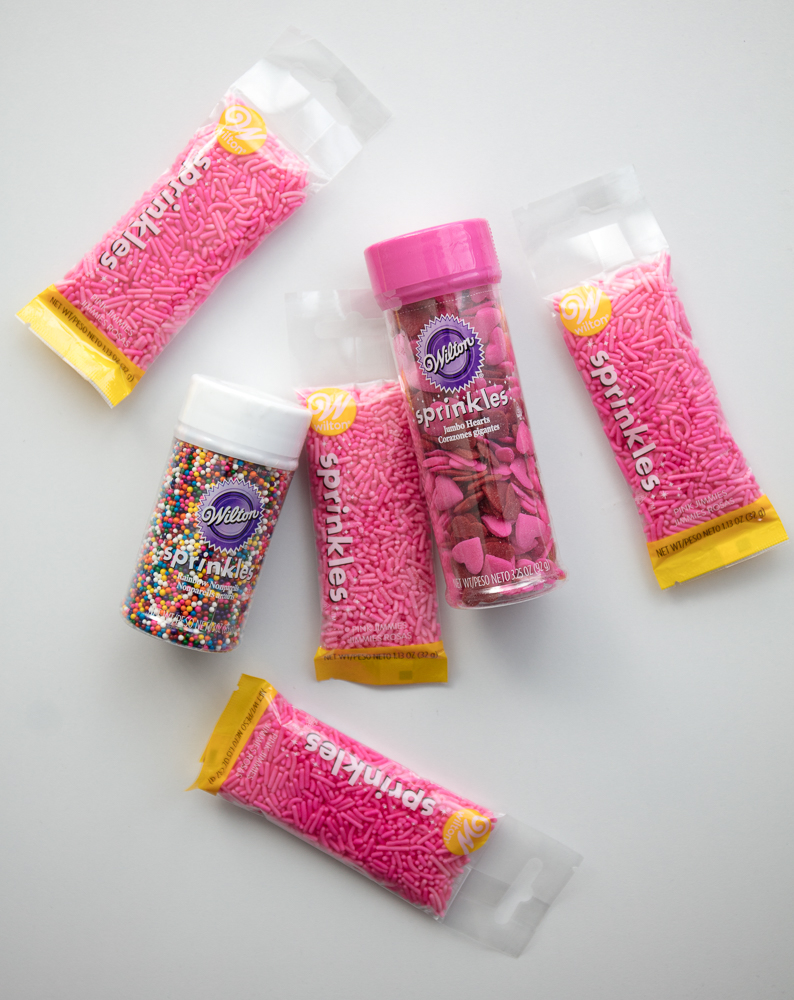 Wilton is another company that makes both vegan and non-vegan sprinkles. Unlike the former three companies, Wilton sprinkles are sold in a lot of places, so if you need something quick and can’t wait for shipping time, these are your best bet.

Also, unlike the others, Wilton doesn’t label their vegan sprinkles anywhere, so you have to read the backs of every bottle. I realize that vegans are probably used to doing this, but it’s not like we have all the time in the world. There are cakes to decorate!

In an effort to save you time reading sprinkles bottles, here is a list of all the wilton sprinkles that I know are vegan as of the time I’m updating this post (April 2018). I’m not sure as to the source of the sugar in Wilton sprinkles, so if you’re strict about sugar, you should contact wilton and ask them (and then let me know please!). 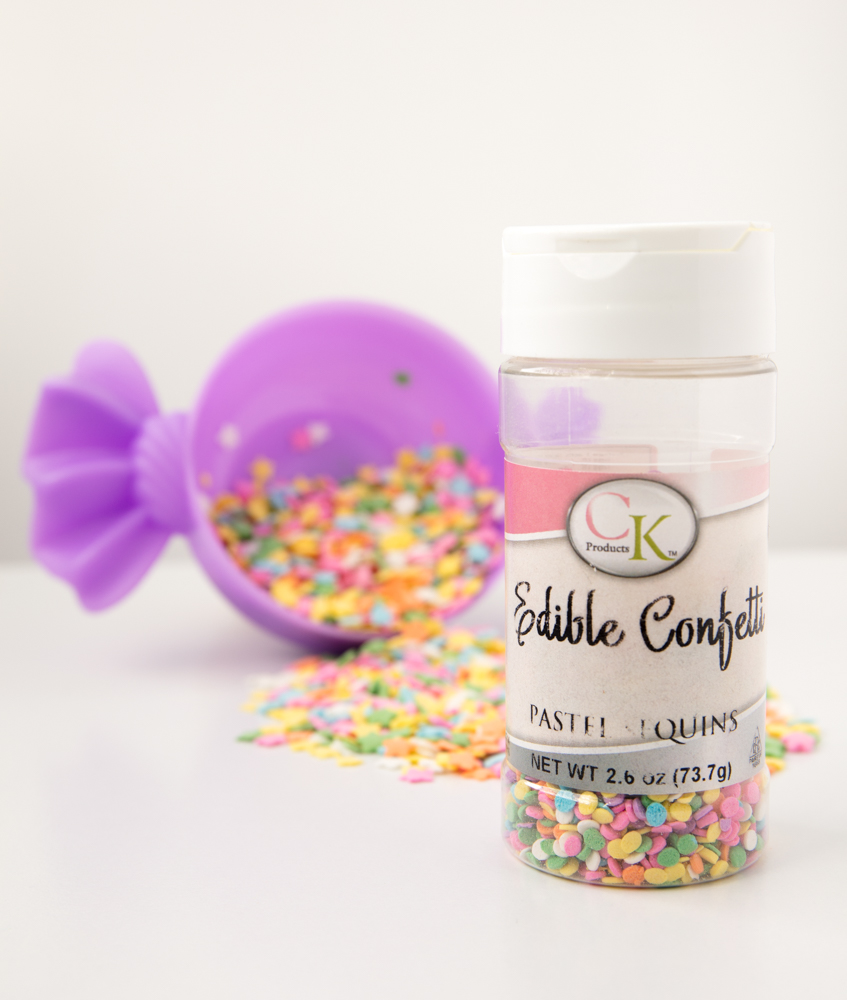 Only two of CK Products Edible Confettis are vegan: the pastel sequins and the daisy shapes. It’s nice that the company website lists the ingredients for all their sprinkles.

I’m not sure as to the source of the sugar in CK sprinkles, so if you’re strict about sugar, you should contact them and ask (and then let me know please!).

Lieber’s were the first bright rainbow jimmies I found back when the only other vegan sprinkles I could find were muted and all-natural or ones only sold in other countries. Lieber’s used to be very affordable on Amazon, but now that the price is over $10, I don’t recommend them.

If you’re doing some high volume baking with sprinkles, you might be interested in these nonpareils made by A Great Surprise. I don’t know much about them, but I do know a good deal when I see it, and this is a great deal, compared to wilton nonpareils.

I’m not sure as to the source of the sugar in these sprinkles, so if you’re strict about sugar, you should contact them and ask (and then let me know please!).

I haven’t actually had the chance to try these yet, because they just came out, but I love Color Kitchen’s all-natural food coloring, so I’m guessing these are healthier than most of the others I’ve mentioned. You can find these at Whole Foods or on Amazon. 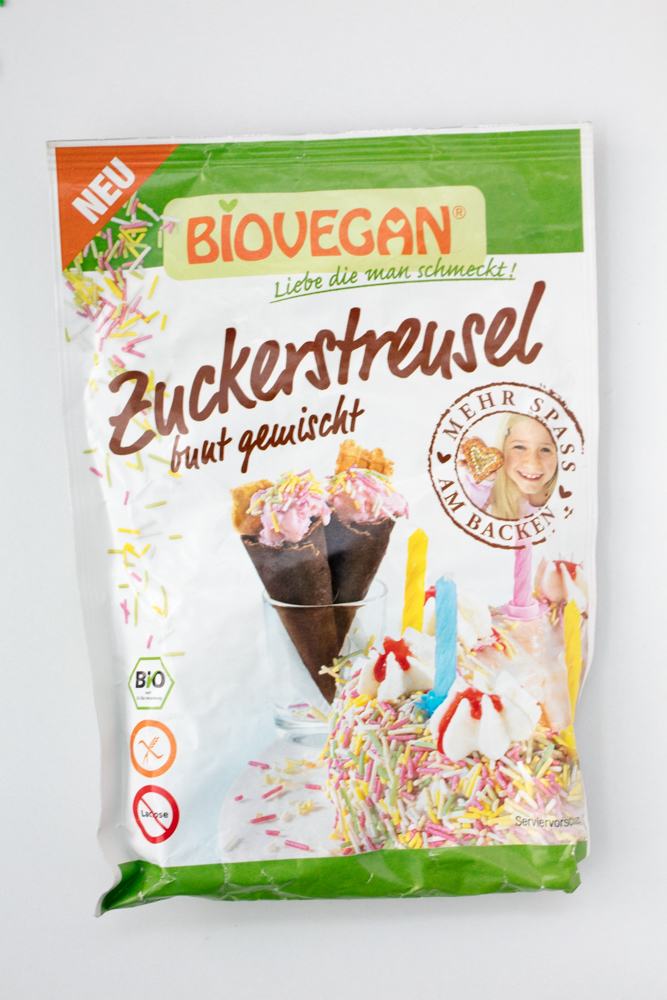 BioVegan has a good selection of all organic and vegan sprinkles that are brighter than the Let’s Do Organic ones. The downside is that these are only available in Europe. 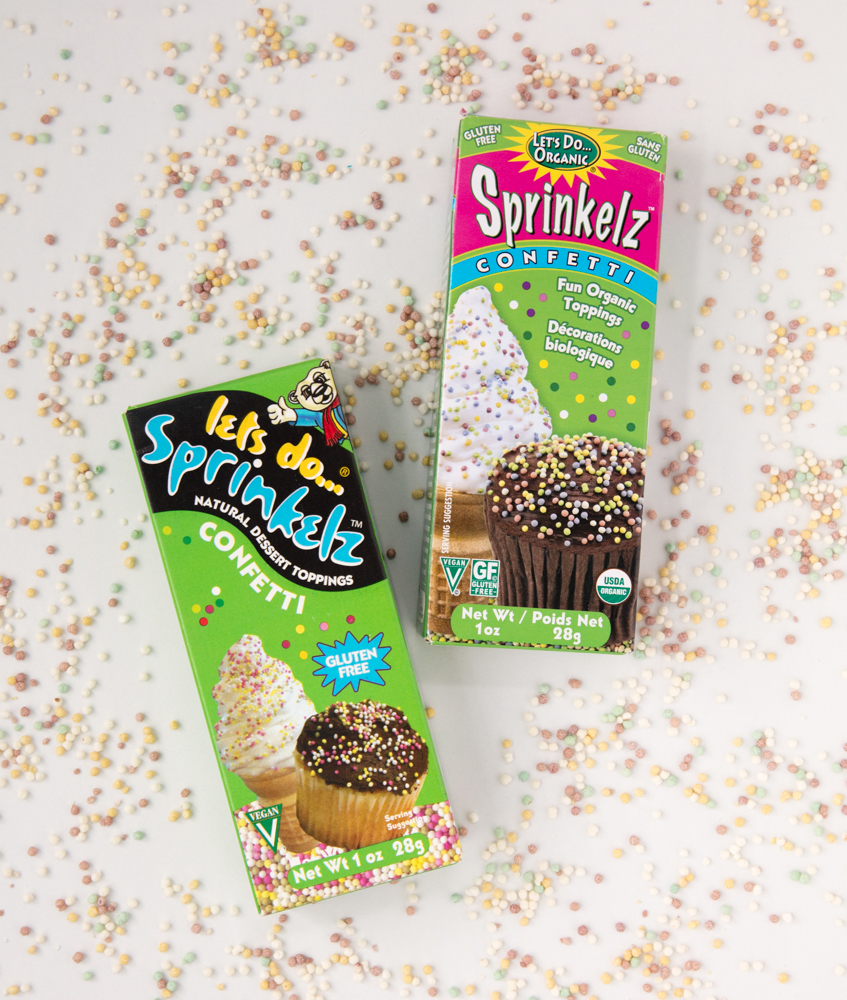 These are made by the same company that makes the organic ice cream cones, and I believe it’s also the same company that makes all those rice crackers. These sprinkles are organic, which makes them the healthiest ones, but because they’re healthy, the colors are more muted. I stopped using these as soon as I discovered Lieber’s, so unless you’re super strict about eating 100% organic, I would avoid these ones. You can find these at Whole Foods and Amazon.